“The right of citizens of the United States to vote shall not be denied or abridged by the United States or by any State on account of sex. Congress shall have power to enforce this article by appropriate legislation.” The passage of the 19th Amendment represents a landmark moment in the history of American democracy, enshrining, as it did, fuller citizenship for women in the Constitution. It is tempting to look back on this as something of a historical inevitability—of course women would get the right to vote (how could they not?)—but this was by no means the case. Winning the right to vote was instead the culmination of a long and difficult struggle against intense and determined opposition. Nearly three-quarters of a century separated the first calls for suffrage and the passage of the 19th Amendment; by the time of its full ratification on August 18, 1920, a remarkably diverse group of supporters and advocates had spent decades meeting, writing, lecturing, lobbying, marching, and tirelessly practicing civil disobedience while risking ridicule, abuse, and even arrest. Their ultimate triumph was very much the work of a social movement. “Our Roll of Honor, Containing All the Signatures to the ‘Declaration of Sentiments’ Set Forth by the First Woman’s Rights Convention held at Seneca Falls, New York, July 19–20, 1848.”
Elizabeth Cady Stanton Papers, Manuscript Division, Library of Congress

Although many individuals had expressed their dissatisfaction with the social role of women during the early republic, the movement to support women’s rights only fully emerged in the 1830s, out of the abolition movement. In 1848, Lucretia Mott, Elizabeth Cady Stanton, and others organized the first Woman’s Rights Convention in Seneca Falls, NY, which would later be viewed as the launching point of the suffrage movement. The group drafted a set of resolutions—the Declaration of Sentiments—modeled on the Declaration of Independence. It consisted of a long list of rights and voting was but one, though it was certainly the most controversial. Voting would not become a truly central concern until the 1860s.

The strategies for securing voting rights varied throughout the 19th century, in part because the Constitution did not specify any eligibility requirements, leaving the issue to individual states to resolve. For nearly fifty years, efforts at change proceeded in a piecemeal fashion, with women winning “partial” or limited rights (or “privileges”) in a number of states, counties, and municipalities. Many of these early victories were in Western states: Wyoming became the first state to grant women the right to vote in 1869, followed by Colorado, Utah, and Idaho in the 1890s.

“It is downright mockery to talk to women of their enjoyment of the blessings of liberty while they are denied the use of the only means of securing the ballot.”
— Susan B. Anthony The passage of the 14th and 15th Amendments transformed the women’s rights movement. The amendments, among other things, tied the right to vote to citizenship itself, while providing a federal rule that superseded individual state regulations. In January of 1866, Susan B. Anthony, Elizabeth Cady Stanton, and Lucy Stone, with others, sent Congress a petition for “universal suffrage” and in 1873, the National Woman Suffrage Association submitted another for the passage of a Constitutional Amendment enfranchising women. A combination of activities supporting the country’s efforts in the First World War, particularly on the part of the National American Woman Suffrage Association, as well as publicity from the more militant tactics (such as picketing in front of the White House) of the National Woman’s Party, led to broader support for suffrage in the first decades of the 20th century. President Woodrow Wilson, who had previously refused to endorse suffrage, took to the floor of the Senate in September 1918 to declare: “We have made partners of the women in this war… Shall we admit them only to a partnership of suffering and sacrifice and toil and not to a partnership of privilege and right?” The suffrage proposal passed the following year and, on August 18, 1920, Tennessee became the final state to pass the resolution (by a single vote) needed to ratify the 19th Amendment. The wording of both the 15th and 19th Amendments was prohibitive, stating what a state could not do, putting the burden of discrimination on the person discriminated against, whose voice was often already muted because of gender. Despite this, in the first presidential election after the amendment was adopted, 8 million women voted, almost 8% of the U.S. population at the time.

We rightly celebrate this monumental achievement. But, it was, even at the time, an incomplete victory. The 19th Amendment itself declared only that states could not deny the right to vote on the basis of sex; while this represented the single largest expansion of the electorate in American history, millions of women remained unable to vote due to other discriminatory restrictions (most African Americans in the South were blocked by poll taxes and literacy tests; Asians and Native Americans were barred from citizenship altogether). Moreover, although women like Harriet Tubman, Sojourner Truth, Maria Stewart, Harriet Forten Purvis, and Ida B. Wells were particularly prominent figures in the women’s rights reform movement, the roles of black women as a whole have largely been overlooked in a historical narrative dominated by the work of white women like Susan B. Anthony and Elizabeth Cady Stanton. Despite the fact that they were excluded from local women’s rights organizations at the time, the tireless grassroots activism of these dedicated suffragists (and, yes, the appropriate term is “suffragist” rather than “suffragette,” which was a term of belittlement coined by detractors) was crucial to the success of the fight for voting rights. Winning the right to vote was the product of a long collective struggle for equality on the part of thousands of women. And it is one that continues today. Nannie Helen Burroughs (left, holding banner, circa 1910) was a leader of the Woman’s National Baptist Convention and an advocate for women’s suffrage.
Library of Congress

If you would like to learn more about the 19th Amendment and the Women’s Suffrage Movement, there are three fascinating online exhibitions up now that are definitely worth checking out: Shall Not Be Denied: Women Fight for the Vote at the Library of Congress; Rightfully Hers: American Women and the Vote at the National Archives Museum; The History of the Suffrage Movement at the National Women’s History Museum.

There’s also a wonderful and illuminating podcast put out by the Wonder Media Network called She Votes! Our Battle for the Ballot.

And, of course, the Westchester Library System has plenty of resources on the subject. Below is a short list of DVDs, books and graphic novels, some of which are available digitally! 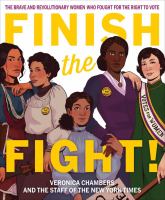 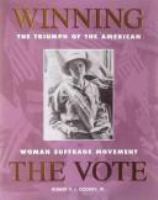 American women’s suffrage: voices from the long struggle for the vote 1776-1965, by Susan Ware
Digital eBook

Finish the fight!: the brave and revolutionary women who fought for the right to vote, by Veronica Chambers and The Staff of the New York Times

Mr. President, how long must we wait?: Alice Paul, Woodrow Wilson, and the fight for the right to vote, by Tina Cassidy

The myth of Seneca Falls: memory and the women’s suffrage movement, 1848-1898, by Lisa Tetrault

Not for ourselves alone: the story of Elizabeth Cady Stanton and Susan B. Anthony [DVD], Ken Burns

The right to vote: the contested history of democracy in the United States, by Alexander Keyssar

Roses and radicals: the epic story of how American women won the right to vote, by Susan Zimet

She votes: how U.S. women won suffrage, and what happened next, by Bridget Quinn and Nell Irvin Painter
Digital eBook

Vote!: women’s fight for access to the ballot box, by Coral Celeste Frazer

Why they marched: untold stories of the women who fought for the right to vote, by Susan Ware

Winning the vote: the triumph of the American woman suffrage movement, by Robert Cooney and National Women’s History Project

The woman’s hour: the great fight to win the vote, by Elaine F. Weiss
Digital eBook