Allen Ginsberg was an American poet born June 3, 1926 in Newark, New Jersey to a Jewish household. He was never a man who was afraid to make waves, being unapologetically honest with his thoughts and beliefs and rebelling against organizations and movements he saw unjust. His most famous work, “Howl” was even taken to court for being seen as too “obscene” for its descriptions of sexual relations. Raised mostly in Patterson, quite a few people, from family to other writers and scholars, would influence his works.

Ginsberg’s father was a poet and school teacher, while his mother was a Russian emigrant and follower of Communism. It’s even recorded that she brought him and his brother to several meetings. She also went through great personal struggles, having schizophrenia, which affected the raising of her children. During his younger studies, Ginsberg became a huge fan of Walt Whitman’s writings. With this upbringing, once attending Columbia University he was known as something of a “rebel”. He became friends with Jack Kerouac and William Burroughs, fellow writers and thinkers, and the trio is known to be important figures of the Beat Movement. His time during and after college proved to be troublesome for the authorities (at one point he was even convicted of a crime and to serve less time, pleaded insanity) but it was also a point for Ginsberg to immerse himself in the Beat Movement and voice his own unique style of writing.

Moving to San Francisco proved to be a pivotal point in Ginsberg’s life. It was here in 1956 that he published Howl and Other Poems, bringing him into the public eye for better or worse. The work was considered scandalous, raw, and obscene, with especial condemnation for it’s descriptions of both hetero and homosexual sex. The first line of the poem reads,  “I saw the best minds of my generation destroyed by madness, starving hysterical naked…” It deals with strong themes of homosexuality, drugs, and critiques of America after World War II. Critics were thoroughly split down the middle of their view on it but San Francisco police took a quick stance, arresting the publisher (Lawrence Ferlinghetti) for peddling such graphic depictions. However, the judge ruled in favor of its publication, and Howl became something of a mascot for the Beat Movement.

It was in San Francisco that Ginsberg met Peter Orlovksy. The two quickly fell in love and would remain together for years until Ginsberg’s death, publicly considering themselves married though the law did not allow it at the time. He was known as Ginsberg’s muse but was a writer himself as well as a fellow social warrior. Orlovksy died  May 30, 2010 from lung cancer. The couple is praised in the LGBQT community for their unapologetic relationship.

After Howl, Ginsberg went on to publish Kaddish and Other Poems in 1961. Dedicated to his mother, the poem depicts her struggle with mental health and Ginsberg’s complicated love and mourning for her. The title references a Hebrew prayer of the dead. Considered so powerful, the poem’s acclaim has even sometimes reached that of Howl. Other works to have followed were Reality Sandwiches (1963), Planet News (1968), and Indian Journals (1970). The work, Fall of America (1972) won the National Book Award. Then in 1995 he was honored as finalist for the Pulitzer Prize for Cosmopolitan Greetings: Poems 1986-1992. But these were just two of the many honors awarded in his lifetime.

On April 5, 1997 Ginsberg sadly passed away. He had been struggling with hepatitis and diabetes, which had unfortunately led to liver cancer. His legacy, however, would not be forgotten. Ginsberg dedicated so much of his time, work, soul, and thought to so many different facets of the world. He was a writer, a spiritualist, and a social and political activist that helped fight and shape the way so many people thought and acted.

What better way to celebrate Allen Ginsberg’s birthday than to read one of his thought-provoking poems? But even reading about this amazing’s man’s life could take up an entire afternoon. He accomplished so much, and influenced so many. His life was truly his greatest work ever. You can find many of the titles mentioned above and others on Libby and Hoopla as well as clicking on them below to see what library you can borrow them from. And don’t forget to wish this beloved author a Happy Birthday on June 3!

“Poetry is not an expression of the party line. It’s that time of night, lying in bed, thinking what you really think, making the private world public, that’s what the poet does.”

Written by Margaret Andracchi
Reference Librarian, Will Library
Currently trying to get my reading back on track for the Summer Reading Challenge (Sadly still on Book #1) 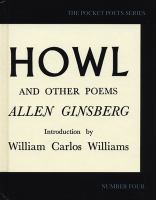