On August 24, 1977 famous Young Adult author John Green was born. While being most known as a skilled writer, he is also an acclaimed vlogger, editor, and producer. Green was born in Indianapolis but moved around several times, inspiring locations for many of his future books. Additional inspiration came from the fact he was bullied in his adolescence and often felt like an outsider, reflected in many of his characters’ lives. Green once had plans to be a minister, and received a degree with a double major in English and Religious Studies from Kenyon College. However, he had a difficult experience working at a children’s hospital and witnessing the life-threatening struggles patients had to go through, and instead directed his energy to writing for this age group.

Green first’s job was for a book review journal, Booklist, and had his first novel published in 2005 titled Looking For Alaska. A coming of age story mixed with romance, the book quickly reached the NY Times Bestseller List. Its details the experience of Miles Halter’s, a young man obsessed with people’s last words, time at a new boarding school where he meets the alluring Alaska Young and tries to understand the expectations he’s put on life. Green was praised for his approach to depicting teen adolescence in expressive thoughts and real emotions, a trend that would continue with his future books. However, on the flipside of this fame, Looking for Alaska made its way to many banned books lists. It was even proclaimed the most challenged book in 2015 by the American Library Association (and appeared in the ALA’s Top 10 Most Challenged Books in 2012, 2013, and 2014). The issues which some found offensive where its use of profanity, drug and alcohol abuse, and sexual situations. Green, however, defended his work and depictions, which you can view here on the Youtube channel he shares with his brother, Hank. Despite this controversy, it was quite the introduction for Green into the literary world and earned him the The Michael L. Printz Award for Excellence in Young Adult Literature in 2006.

Following this explosive first novel was An Abundance of Katherines in 2006 (only a year later!), which became another contender for prestigious literary awards. The year 2008 would see the publication of Green’s third novel, Paper Towns, an instant bestseller. This centers around another forlorn youth looking for love and purpose, all the while trying to solve the mystery of the disappearance of his dream girl. The book won the 2009 Edgar Award for Best Young Adult Mystery, along with other accolades.

The height of Green’s literary success came in 2012 with the introduction of the Fault in Our Stars. Sixteen year old and terminally ill Hazel Grace meets the charming Gus Waters, and the two learn if happiness and love can be possible and genuine with the threat of sickness always looming above their heads. Again, Green was praised for being able to write about the lives of teenagers with such a mature and realistic voice but this time while dealing with serious themes such as grief and death. His time working at the children’s hospital earlier in his life proved to be a help doing so. It was a massive success, both critically and financially, and skyrocketed to number one on best seller lists and honored with the 2013 Children’s Choice Book Award for Teen Book of the Year.

Green was also involved in successful writing collaborations. In 2008 he worked with fellow YA authors Maureen Johnson and Lauren Myracle to create Let It Snow: Three Holiday Romances (which was also adapted into a Netflix movie now available to stream). Then in 2010 a LGBT themed story that earned bestseller status was Will Grayson, Will Grayson, that shared writing credits with David Levithan.

The most recent story to be released by Green was Turtles All the Way Down in 2017 (five years after The Fault In Our Stars). Aza Holmes, a sixteen year old girl with OCD, goes on a quest with her best friend to find a missing millionaire to cash in on a very big reward. Ava’s struggles with this mental illness echo Green’s own as he is also diagnosed with obsessive-compulsive disorder. Like the stories before it, the work quickly climbed out the top of NY Times Bestseller List.

While Green’s status as an author is nothing to scoff at, neither is work as a vlogger. He and his brother, Hank, began the Youtube channel “vlogbrothers” in 2007 and it presently has a following of 3.46 million subscribers. Though episodes definitely showcase the brothers’ humor (they began the channel because they stopped texting and only communicated via this route) they also discuss relevant issues in society and support many great causes. As explained on Green’s bio webpage: “The videos spawned a community of people called nerdfighters who fight for intellectualism and to decrease the overall worldwide level of suck. (Decreasing suck takes many forms: Nerdfighters have raised millions of dollars to fight poverty in the developing world; they also planted thousands of trees around the world in May of 2010 to celebrate Hank’s 30th birthday.)” The two also birthed the CrashCourse channel on Youtube, which provides educational lessons on various different topics. (“World History, Literature, Economics, Physics, Biology, Chemistry, and Government are just some of the courses available to date. Crash Course has over 10.7 million subscribers and 1.2 billion views,” as described via Green’s website).

Movies and television have clamored to adapt Green’s many influential works. The Fault In Our Stars was the first, released 2014 with Shailene Woodley and Ansle Elgort as the leads and in supporting roles Natt Wolf, Laura Dern, and Willem Dafoe. It earned near $50 million dollars on its opening weekend. Natt Wolf got a turn as lead actor in 2015 with Paper Towns alongside Cara Delvigne, though it never quite reached the success of its predecessor. There had been plans to turn Looking For Alaska into a feature film but after a number of setbacks, Hulu eventually picked it up for an 8-episode run (now streaming). Turtles all the Way down has been scheduled to become a feature picture but has yet to begin filming.

What better way to celebrate John Green’s birthday than to read one of his poignant stories of growing up and the beautiful messes that come along with it? People of all ages not only attest to loving his writing, but simply the man himself. His creativity, viewpoints, and humor can be viewed with the mere tap of your fingers by watching his many, many videos free online and he’s been known to be active on other social media sites too. You can find many of the titles mentioned above and others on Libby, Hoopla, and Kanopy as well as clicking on them below to see what library you can borrow them from. And don’t forget to wish this beloved author a Happy Birthday on August 24th!

“If the inevitability of human oblivion worries you, I encourage you to ignore it. God knows that’s what everyone else does.”

-John Green, The Fault In Our Stars

Written by Margaret Andracchi
Reference Librarian, Will Library
Yes, I cried while both reading the Fault in Our Stars and watching the movie. Sue me. (Though, fyi, you should definitely read it first) 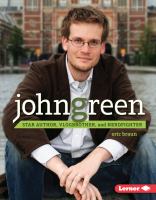