Beloved children’s author Roald Dahl was born on September 13, 1916 in Llandaff, Wales. Growing up in England, he avoided college and instead found work that allowed him to travel. World War II would soon break out and see Dahl enlisting in the Royal Air Force. His service also included work as a spy. Writing finally became a possibility for him after this time, where he wrote for Saturday Evening Post, recounting tales during his time in battle. Eventually, Dahl would become, as labeled by The Times, one of “The 50 Greatest British Writers Since 1945.” Known for being a master in children’s literature, his relationships with his children shaped most if not all of his tales, as they acted as his tiny advisors.

Dahl’s first published book was The Gremlins in 1943 and then Over to You: Ten Stories of Flyers and Flying in 1946. Both, again, reflected his time in service. His real breakthrough, though, was in 1961 with James and the Giant Peach. The story focuses on a young orphan boy who happens upon a larger than life peach inhabited by fantastical garden bugs. Escaping a miserable life ruled by terrible aunts, James and his friends go on an amazing journey using the peach, captivating audiences everywhere.

From then one, everything Dahl released was gold. Charlie and the Chocolate Factory came out in 1965, the timeless tale of a poor boy who wins the chance of a lifetime to visit the famed chocolate factory owned by the mysterious Willy Wonka. (The sequel, Charlie the Glass Elevator followed in 1972). In 1970 was The Fantastic Mr. Fox, a clever furry patriarch who outwits three troublesome farmers. Then there was the BFG (1982), reportedly Dahl’s favorite story. The Big Friendly Giant is a friend of all children, helping store their dreams, who meets a young girl named Sophie and the two team up to stop meaner giants from terrorizing people. The quest to stop another force of villainy, this time in the form of witches, came in 1983 with the young hero and his grandmother finding themselves amidst a whole convention of them in The Witches. Matilda was then published in 1988, the story of a young girl with high intelligence and magical power to boot, who fights back against cruel adults.

Dahl easily won award after award for these beloved tales, but interestingly enough they were also met with criticism. Some thought it too dark or grimly realistic the way young protagonists vanquished their villainous adult antagonists. Additionally, comedic elements were deemed above the understanding of this age group, even being labeled as black humor. More worrying were accusations of racism, misogyny, and anti-Semitism that have plagued his legacy. Oompa loompas, for example, have been cited as examples of racism, as they are dark skin colored characters who are “saved” by a white man. The book even states, “I (Willy Wonka) found them in the very deepest and darkest part of the African jungle where no white man had ever been before.” Dahl himself has been recorded making several anti-Semitic statements, to the point where his family gave a public apology on his behalf sometime after his death. There are arguments claiming that not much of his personal beliefs bled into his writing, but disassociating an author from their works will have to be up to the opinion of readers.

All of the best selling novels (that’s right, all) mentioned above have been made into some pretty memorable feature films, some so popular they were given remake treatments. Disney released James and the Giant Peach in 1996, a film mixed with live acting and stop motion animation, that earned a nomination for the Academy Award in Best Music, Original Musical or Comedy Score. It currently holds a 91% approval rating on Rotten Tomatoes. Twisting the original title, Willy Wonka and the Chocolate Factory was released in 1971starring Gene Wilder who earned a Golden Globe nomination for Best Actor in a Comedy or Musical for the role of the eccentric owner. Dahl reportedly disapproved of the film and the changes made front page to screen as well as the choices in music. In 2005 a remake was released, this time starring Johnny Depp and returning to the original title of  Charlie and the Chocolate Factory (getting an Oscar nomination for Best Costume Design).

A movie Dahl did approve of was The BFG (1989), a animated film with the voice of David Jason in the titular role. Perhaps a bit more well known was the more recent remake, The BFG in 2016, a live action retelling with some CGI elements produced by Steven Spielberg. Highly praised, even with some truly terrifying scenes, was The Witches (1990) starring Anjelica Huston. The film has a 93% approval rating on Rotten Tomatoes, which is a great contrast to the much poorly received remake starring Anne Hathaway that came out in 2020 (a 49% rating, if you were wondering). Another delightfully received adaptation was The Fantastic Mr. Fox (2009), a stop motion tale directed by Wes Anderson. Nominated for the Academy Award for Best Animated Feature, the film includes the voice talents of George Clooney, Meryl Streep, Bill Murray, William Dafoe, and Owen Wilson (plus much more). Danny Devito took an interest in both directing and acting in a Dahl creation in 1996 with Matilda, giving Mara Wilson the reins of the very gifted little girl. The film (and story) gained such a following that Broadway couldn’t help but take notice, making it a four time Tony Winner (it’s last performance was in 2017).

What better way to celebrate Roald Dahl’s birthday than to read classics that, though aimed at children, can be cherished by all ages? Even better, why not introduce them to someone young, so they can see just how fun reading can be? And with Halloween coming up, it might be fun to watch one of the many mentioned films, especially The Witches (the original, of course). You can find many of the titles mentioned above and others on Libby, Hoopla, and Kanopy as well as clicking on them below to see what library you can borrow them from. And don’t forget to wish this beloved author a Happy Birthday on September 13th!

“Never do anything by halves if you want to get away with it. Be outrageous. Go the whole hog.”

Written by Margaret Andracchi
Reference Librarian, Will Library
Just finished a YA series, The Inheritance Games, if anyone like mysteries, riddles, and the troubles that come with inheriting billions of dollars when you’re a teen 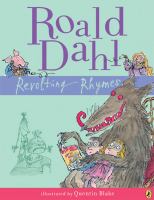