On December 7th, 1941, the Japanese Imperial Navy attacked the Army and Navy base at Pearl Harbor, Hawaii. Japanese aircraft sank five battleships, damaged an additional nine vessels, and destroyed three hundred aircraft. 2,403 sailors, soldiers, and civilians were killed in the attack and about 1,000 were wounded. The United States declared war on Japan the following day. On the 80th anniversary of the attack,  it is important to remember what U.S. service members endured at Pearl Harbor and acknowledge those that lost their lives.

On Tuesday, December 7th at 6 PM the Yonkers Public Library will be hosting a program called Pearl Harbor Remembrance Day with Bob Abate. Abate will talk about Pearl Harbor survivor Armando “Chick” Galella. Bob and Galella became friends following an oral history interview Bob conducted. Abate will talk about Chick’s service during World War Two and their friendship up until Chick’s passing at the age of 100. You can register for the program on the YPL website.

To learn about more Pearl Harbor, take a look at the curated ebook display. These ebooks can be read through Overdrive. For assistance in downloading and reading these ebooks, see a librarian at the Reference Desk. 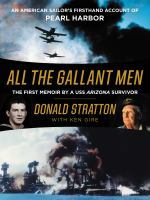 Mike had the honor of meeting Chick Galella at a Pearl Harbor Remembrance Ceremony at the USS Intrepid.