March 26, 2021 is the 110th anniversary of the Triangle Shirtwaist Fire. During this horrific event, 146 workers of the factory died. The podcast American History Tellers examines this tragedy in its sixteenth season.  Lindsay Graham, creator and producer of several other podcasts, is the host of American History Tellers. In the five episodes about the Triangle Shirtwaist Factory, you hear about the labor movement before the fire, what happened during the fire, and the legacy of the disaster.  Background noises mimicking early 20th century America and historical fiction dialogue, makes the podcast theatrical. The theatrical aspect of the podcast and the astonishing facts narrated by Graham, maintained my attention for all five episodes and made it easy for me to learn about a complicated topic.

An interesting part of the podcast is about the labor movement at the Triangle Shirtwaist Factory before the fire. The mostly female employees worked long hours without little pay. When they went on strike and picketed the factory, the owners of the factory (Isaac Harris and Max Blanck) unleashed ruffians upon them and they were beaten and placed in jail . Due to a union movement throughout NYC, Harris and Blanck ultimately agreed to better working conditions with the employees. None the less, Harris and Blanck still locked doors out of paranoia of theft in the factory and maintained a unsafe building. These introductory episodes give a through analysis on the labor movement and the negligence of Harris and Blanck that led to the deaths of 146 people.

During the episode of about the fire, you hear gripping narrations about individuals who somehow survived. You hear how some just managed to squeeze into a elevator before the building was engulfed in flames and how others climbed down elevator shafts using its cables. Many were unable to escape the building due to locked doors, the lone fire escape collapsing , and certain exits of the building not being told to workers.  There are gruesome details described, which are disturbing but necessary to hear in order to truly comprehend the disaster.

Towards the end of the podcast, you learn about the trial of Harris and Blanck. Both managed to avoid persecution due to maneuvering by their lawyer Max D. Steuer, which is one the enraging parts of the story of the fire. On a brighter note, you hear requirements in working and building conditions that became law. A key figure in passing labor laws was Frances Perkins. You hear about her advocacy for workers’ rights and her relentless effort in ensuring it was a national issue.

I highly recommend this podcast to anyone who wants to learn everything about the Triangle Waistcoat Factory fire. There is a significant time spent providing background to the fire. This sets the stage perfectly for the episode in which it is described. The event is analyzed with testimonies of survivors and stories of those who worked in the factory,  You learn about some of labor laws of today are directly to the Triangle Shirtwaist Factory fire.  American History Tellers is a relevant and educational podcast.

The American History Tellers podcast can be listened to on their website.  You need to scroll through their archives to get to season sixteen, which was created on October 23, 2019.  It can also be listened to on any major podcast apps.

To learn more about the Triangle Shirtwaist Factory, a recommended reading list has been created. These books can be placed on hold and picked up at any branch of the Yonkers Public Library. 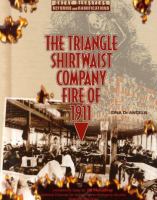 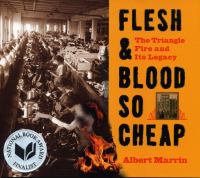