Renegades: Born in the USA is the podcast of a long conversation between Barack Obama and Bruce Springsteen. They discuss several topics that include race, economics, music, family and fatherhood. Bruce talks about the background to his songs and plays acoustic versions of them for the podcast. Though Obama and Springsteen come from different backgrounds, they describe the ways that they both felt like outsiders growing up. Their discussions are enjoyable to listen to and besides insight into a variety of topics, they incorporate humor into their conversations. There is something in this podcast that everyone can relate to.

The first topic that Springsteen and Obama discuss is race. Springsteen grew up in a neighborhood that was mostly a working class white one. He had black friends but he was discouraged from hanging out with them. Racial tension built up to the Asbury Park Riot that occurred close to where Springsteen lived. He also talks about fellow musician Clarence Clemons and the insecurity that he felt as being the only black member in the band. Obama talks about experiences with racism he had in Hawaii. He was one of only a few African Americans there and was the victim of racism. One incident included a teacher making a racist joke about the color of his skin. This part of the podcast was insightful into the history of racial relations in the United States through the personal narratives of these two men.

There are several discussions about music on the podcast but one episode focuses entirely on it. Springsteen was influenced by The Beatles as well as Elvis Presley after watching his performance on the Ed Sullivan show. This motivated him to be a rock star so he purchased a guitar and started a band. Obama listened to artists such as Stevie Wonder, Billy Paul, and other soul musicians. This differed from his friends that enjoyed rock n’ roll and heavy metal. Though Springsteen is the rock star, Obama sang part of “Let’s Stay Together” at the Apollo Theater and “Amazing Grace” at the Reverend Clementa Pinckney memorial service. This part of the podcast is especially entertaining!

Obama and Springsteen both had complex relationships with their fathers. Obama spent only a short time of his life with his own. His mother and father separated when Barack was only one. When he was nine, his father came to Hawaii to live with Barack and his mother. After spending about a month in there, he went back to Kenya. His father passed away in a car crash shortly before Obama was planning a trip to Kenya to visit him. Sprinsteen’s father suffered from mental illness and was emotionally detached from his family. He drank heavily to combat his inner struggles. This prevented Bruce from developing a close relationship with father early on in his life. Both Obama and Springsteen talk about how they broke the cycle with their own families and made sure they were emotionally available to them.  It is moving to hear their honesty about these dark chapters of their lives and how they strove to be different with their own families.

Barack Obama and Bruce Springsteen beautifully articulate their views on many topics in Renegades: Born in the USA. Though there are books about each of them, it is moving and inspirational to hear them talk about stories from their lives. It is interesting to hear how their lives were so different and yet they felt emotionally the same during parts of it. This is especially in regards to their fathers and how they how tried to be different from them in certain ways. Their wisdom and honesty can be appreciated by all.

Renegades: Born in the USA can be listened to at the Great Pods website. There is a list of apps that this podcast can be downloaded to.

To learn more about Barack Obama and Bruce Springsteen, take a look at these books. They can be placed on hold and pick up at any branch of the Yonkers Public Library. 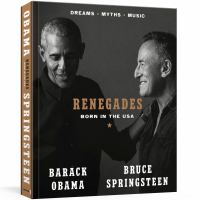