When people are asked about who started the Great Chicago Fire, it is the accepted consensus that Mrs. O’Leary’s cow started it. In the Stuff You Should Know podcast, hosts Chuck Bryant and Josh Clark investigate this answer. They present incredible facts about the fire and talk about different theories of how it started. After researching the topic, Bryant and Clark made conclusions of likely suspects who started the Great Chicago Fire. They discuss their findings in the podcast. Stuff You Should Know is educational and humorous. The hosts will  make you laugh at the same as teaching you about important events in history.

In the beginning of the podcast, you are taught facts of why the Great Chicago Fire was so devastating. Reasons include the presence of wooden houses and sidewalks in the city, dried manure throughout Chicago, and little rain in the weeks preceding the fire. Additionally, the Chicago Fire Department fought a 16 acre fire the night before the Great Chicago Fire that exhausted fire fighters and delayed their response to it. The Chicago Fire, which raged from October 8th to October 10th in 1871, killed 300 people, destroyed 18,000 houses, burned 3.5 square miles of the city, and left around 100,000 people homeless. After hearing these facts, I was stunned by how horrible the fire was and I was overcome with sympathy with people who in the city during during the time of the fire.

The belief that Mrs. Kathleen O’Leary’s cow started the fire was based on a rumor concocted by a random individual. The theory is that Mrs. O’Leary was in her barn, placed a lantern on the ground, and her cow kicked over the lantern which ignited the fire. In reality, she was asleep in her house with a sore foot. Her barn was uninsured, which left her without a reason for burning down the barn. Another theory of what started the fire is that a comet struck Chicago, which left the city ablaze. The hosts joke that this idea was generated by the person who invented the big foot myth. Hearing these myths busted by Bryant and Clark was certainly enlightening.

Bryant and Clark discuss suspects that likely started the Great Chicago Fire. These include people who went to a party close to Mrs. O’Leary’s house and went into her barn. Someone possibly tossed a cigarette into flammable material in the barn or kicked over a lantern by mistake while intoxicated. The hosts also talk about two individuals by the names of Dennis Regan and Daniel “Peg Leg” Sullivan who may have been involved in the starting of the fire. The stories of how both of them were at the scene of the fire so quickly and how they became aware of it do not line up, which makes them suspicious. The evidence that is presented is compelling and it will give you new insight into who started the fire.

After being in Chicago on vacation, I listened to the Great Chicago Fire episode of Stuff You Should Know. I was amazed to hear about how much of the city that I saw was devastated by the fire. I learned more about landmarks that I saw and their relation to the fire. The facts and stories in the episode were incredibly interesting! With the amazing facts presented and the humorous commentary, Stuff You Should Know is a podcast that a general audience will enjoy.

The Stuff You Should Know podcast can be listened to on podcast apps such as Apple Podcasts, Spotify, and many others. It can also be on the Apple Podcast website.

To learn more about the Great Chicago Fire, take a look at the books below. They can be placed on hold and picked up at any branch of the Yonkers Public Library. 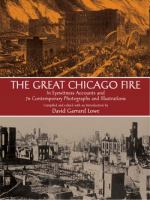 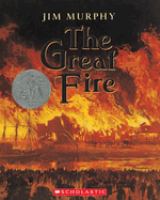